All Collections
Connectors
SMTP Office 365 : How does the connector work?

SMTP Office 365 : How does the connector work?

Written by Mario Zamudio
Updated over a week ago

The major functionality of this feature is based on the principal that there is an email loop between the Office 365 client's tenant and the Letsignit platform. 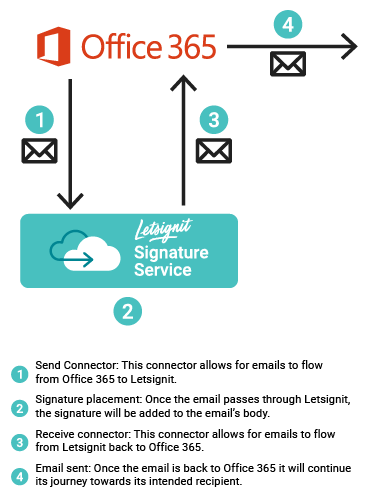 The implementation of this loop follows the recommendations set out in this documentation provided by Microsoft.

The SMTP service is based on a cluster of 3 nodes in the Azure architecture. This configuration ensures the high availability of the 3 nodes.

The last architecture adds a Windows service which permits the execution of necessary routines of the creation of the SMTP connector between Letsignit and Office 365.

Important to note: The signatures cannot be seen in the body of your email, it attaches itself to the email once the email has been sent.

Did this answer your question?